What are black widow spiders?

The black widow spider is a species of venomous spider that can be found across the United States. They are known for their black coloration and distinctive red, hourglass-shaped pattern found on their bellies. Females can be 1-1/2 inches around with their legs fully extended, and have eight eyes arranged in two rows of four. Females are the dangerous ones; males are considered harmless and are about half the size of females, with red or yellow spots or bands on their sides or back. 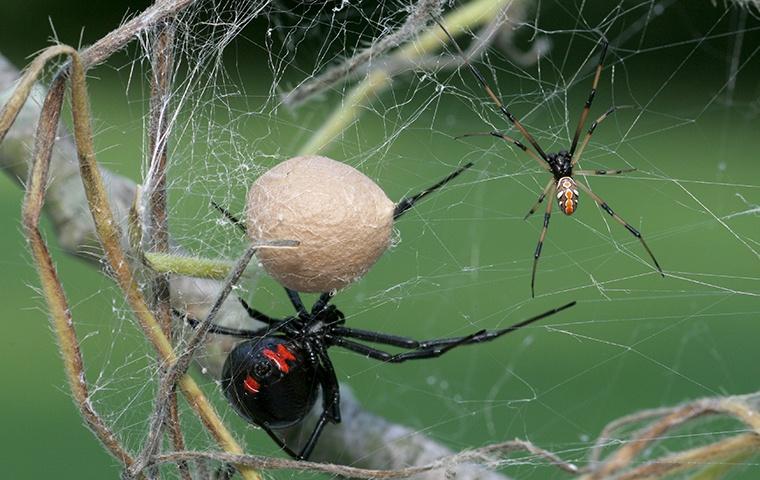 Black widow spiders are venomous spiders that can have serious detrimental effects on humans. While it is extremely rare to experience long term complications or death from a black widow bite, they can still be quite painful and result in a number of complications.

The severity depends on the location of the bite, how much venom was injected, and the person's individual sensitivity. Different people react to black widow bites in different ways; some don’t even notice that they have been bitten right away, while others identify the bite as a sharp pain.

The black widow's venom travels through the bloodstream and affects the nervous system. Common symptoms include severe cramping of the back and the abdominal muscles, tremors, fever, and labored breathing. These symptoms typically subside within a couple of days. If you are bitten by a black widow spider, seek medical attention immediately.

Why do I have a black widow spider problem?

Black widow spiders prefer to live and build webs in warm, closed-in areas with lots of dark corners to hide. They are often found along the perimeter of homes, inside crawlspaces, and around air conditioning units. Like other spiders, black widows are pushed indoors on the hunt for prey and warm shelter. Because they prey on other insects, many black widow infestations are the result of other infestations present in the home.

How do I get rid of black widow spiders?

Black widows are a dangerous pests best left to the professionals. If you are concerned about a black widow infestation around your home, don’t wait to seek help: call the spider control professionals at Pestmaster® Services so that we can help you find the solutions you need to your spider problems.